The fruit-based drinks with pulps and particles (orange sacs, fruit dices and chunks), originally produced in Japan and in the 90s imported in the Western world (in the West), actually evidence a substantial and continuous positive sales trend, especially in Northern Africa and in the Middle East. In fact, the beverage market in general witnesses the “informed” consumer increasingly appreciate healthy and functional natural products, which include also fruit-based beverages with pulp particles.

For more than 10 years A DUE S.p.A. has been involved in the design and manufacturing of the specific plants for the treatment of products containing particles, thus developing extensive expertise, as broad and varied as the processing and packaging technologies of these products are.

This type of beverage usually is composed of fruit juice and orange cells (sacs) or fruit pieces with their content up to a maximum of 10%.

The fruit particles can have very variable dimensions depending on the fruit type: orange sacs range from 3x1mm to 8×2 mm, while fruit chunks (mango, pineapple, strawberry, etc.) from 4x4x4 mm to a maximum of 10x10x10 mm, in some markets such beverages as “nata de coco” and aloe pulp-based drinks are common, thereby causing a remarkable variety of combinations of the “basic” beverage and added supplements (components).

Strawberry, pineapple and grape in pieces

The determining factor for the correct choice of the most appropriate processing technology basically is the type of packaging.

Traditionally these products were packed in cans, hot filled containers, either through “one-shot” or “two- shot” filling, with the first filling performed by a telescopic filler.

Even though the can is still a popular container, nowadays the attention is shifting towards PET containers, thus requiring changes in processing technology.

In this case most applications will require two-shot filling, with the first filling performed by a piston filler; the second filling is hot, while the first one can be either hot or cold.

Another extremely important aspect is the correct preparation of the liquid phase containing pulp and pieces, together with adequate mixing ensuring uniform feeding of the filler.

For this purpose A DUE has developed a system able to prevent product mechanical and thermal damaging whilst ensuring maximum flexibility, both in terms of the type of pulp particles and pieces and in terms of the packaging technology.

This is a very important characteristic especially considering the fragility of the sacs (see fig. 1) and the need to preserve the organoleptic and nutrition characteristics of the product as much as possible.

Another critical factor is the presence of large quantities of various kinds of thickeners, which are fundamental to give the product the right texture and keep the pulp and pieces suspended.

To tackle this specific issue and supply the best solution to every individual need, A DUE has introduced several technological innovations, from turbo emulsifier mixers to dispersion systems up to the in-line dissolvers.

In view of this large variability of the particle containing products and their specific needs, encouraged by the new process engineering variables introduced by major bottlers focusing their attention on the extreme care for detail with the aim to preserve the quality of the finished product and allow the best use of raw ingredients, A DUE has developed a series of innovative solutions.

However, the real innovation is not limited to the identification of the specific solutions, but it extends mainly into the study and research approach.

In fact, notwithstanding half a century experience in the beverage processing, A DUE with the technical and scientific support provided by the University of Parma and in particular by Interdepartmental Centre for Packaging (CIPACK) and the Research Centre for agriculture and food safety, technology and innovation (SITEIA), coupled with the cooperation of the Experimental Station for the Food Preserving Industry (SSICA), has been active in providing an adequate and targeted response to the market development needs.

The project engineering activities had as objective the study and the development of a new technology with advanced level of automation, embracing such phases as preparation, treatment and filling of the juices with fruit pieces or cells, which will be able to ensure high nutritional value of the beverage and its physical and sensory characteristics.

This allowed A DUE to enrich and complete its know-how on the beverages in question updating and enlarging the range of offered equipment.

As regards the details of the activities performed, the project has been structured in four successive different phases (Steps) aimed at the achievement of overall objectives and specific targets.

The starting point was a preliminary study of the state of the art (Step1).

It consisted in a thorough analysis of the state of the art both of the market, in terms of products offered, and of the variety of existing technologies with their strengths and weaknesses, in order to make use of it during the research phase to follow thereafter.

The activities performed within the Step1 in particular were aimed at identification of the key characteristics of the products containing pieces.

Another purpose of the first step conduct was the determination of the nature of knowledge and expertise required for the study of the preparation and treatment processes of the drinks with particles, in particular with fibers and pieces.

Lastly, Step1 allowed to deepen the state of the art of the filling technologies for the beverages with particles and fibers existing on the market.

Market research and study on the beverages with particles

The scientific analysis examined the effects of the shape of the particles, their concentration, type, viscosity and temperature.

After a thorough study and an in-depth examination of technological instrumentation types used in sector literature for the characterization of the foodstuff containing particles similar to those intended for the treatment and filling under the project, the “ad hoc” dimensioning of the measuring system for the products subject to trials (tests) was carried out.

Subsequent to the system dimensioning the final layout was elaborated, whereupon the physical construction of the system took place. Finally the system was installed and put into operation.

The purpose of the trials was to define the rheological characteristics of the products tested (apparent viscosity at different shear rates) and evaluate the tendency to stratification at the bottom or the flotation of the pieces at a certain transition speed, as well as the damaging effect on the pieces.

Besides that, the pump outlet deviation allowed to evaluate to which extent thermal treatment can impact fruit pieces and juice mixed at preset ratios.

The protocol of the trials considered three different procedures, two of which were conducted simultaneously on a given batch of product containing pieces and fibers, while the third phase required the involvement of a sterilization plant as an alternative to the fluid transiting through the tubular heat exchanger making part of the initial plant configuration.

After the validation of the protocol covering the experimental tests phase, the products with pieces were made available through the sector chain reference companies.

Therefore the tests were carried out on 2 types of products, namely:

Moreover, different techniques of pieces and fibres containing products transfer after the treatment and prior to filling actually in use on the market were examined and subsequently studied in detail.

For this purpose a pilot plant simulating the behaviour of the particles during their transit through the pumps, heat exchanger and plant pipework was designed, the indicative layout of which is reported here below. 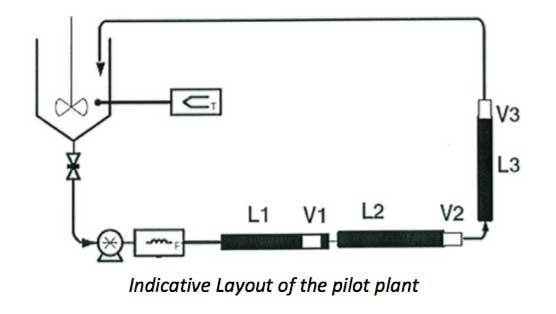 The table below summarizes up the parts included in the plant referred to in the above layout:

Parts of the plant

Subsequently the economic aspects of the proposed solutions (traditional and ohmic thermal treatments, hybrid solutions), were evaluated from the viewpoint of operating costs and those plant-related as well.

The project development moved forward through implementation of the subsequent phase (Step2), i.e. the identification of the appropriate technology for the product preparation and treatment, which core objective was to collect the basic information both on the product to be produced and on the operating principles of the various parts of the processing plant and the examination of the new technological solutions in order to get started the engineering phase.

In this way the outcome of the Step2 activities led to the acquisition of knowledge referred to the processes of preparation, mixing and treatment of the beverages with pieces and fibres ranging in size. This knowledge made it possible to deepen the study and identify the most appropriate technologies and the most suitable systems for the accomplishment of the assigned technological tasks.

Depending on the type of the product and the way it is introduced into the process the mixing technology was examined and the following related activities were carried out: 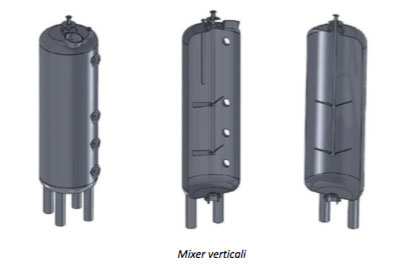 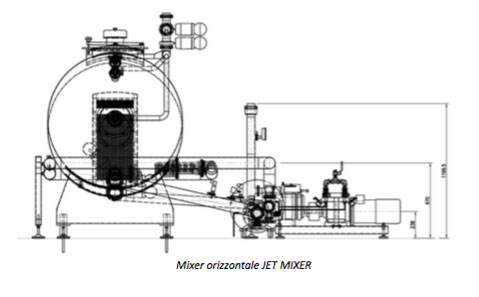 The next phase was the study and engineering of the system suitable to dissolve stabilizers and powder components added to the beverage to ensure homogeneous distribution of the fruit pieces within the liquid phase, i.e. juice.

At the first stage all the industrial components required for the system design and execution were defined.

Thereafter the CAD drawings of the main dissolving system for two size ranges covering the flowrates varying within 6.000 and 13.000 l/h were executed, taking into account subsequent dilution of the product in the finished drink.

It was conceivable a variable reduction of the thickener content in the finished drink by a factor of 5 to 10 compared to the provision made for the tank. Thus the major powder quantities were decided to be used for the major flow rates while the powder quantity for the minor flow rate was intended to be limited.

The following results were obtained from the conducted activities:

Specification of all components required for the design and execution of a dissolving system suitable for industrial-scale applications.

The project completion phase Step4 covered study, engineering and development of the laboratory pilot plant and its testing, and consisted in application of the theoretical knowledge and practical skills acquired throughout the previous Steps in order to design a pilot plant able to prepare, treat and fill into the selected container different types of beverages with pieces, fibres and pulps.

Whereupon the pilot plant was subject to trials and final testing.

Moreover, to support a correct implementation of the pilot plant design and engineering, in the recent period a series of research investigations on specific aspects peculiar to the natural beverages were carried out, such as:

Image Processing : By using a dedicated software it is possible to process images of the particles contained in the samples taken upstream and downstream each processing phase / machine / plant part, thus evaluating quantitatively the incremental and differential damage caused to the product.

Moreover, the above application allows to estimate the degree of damage of the product (pieces or cells/sacs) at the receiving phase, being of utmost importance for the quality control of the incoming raw materials and also representing an excellent instrument allowing to avoid damages erroneous attribution to the technological phases the product undergoes during processing.

On the basis of the above measurements it is possible to monitor each processing phase and get detailed and clear vision of how each process / machine / plant component can influence the product in terms of damaging effect.

The elaboration of the images through “Image Processing” allows to measure the following performance parameters relating to the product weighing:

In particular, the “Image Processing application“ allowed measurement of damage to pulp pieces and cells during various processing and filling phases undergone by foodstuffs with particles in course of the production cycle, with thorough analysis of the product conditions starting from the receiving phase up to the finished drink filling, by using sampling points positioned downstream the production phases of major impact.